At the age of five, Robert Koch astounded his parents by telling them that he had taught himself to read with the aid of a newspaper. This feat merely foreshadowed the intelligence and tenacity which were to be so characteristic of Koch in his adult life. The son of a mining authority, Robert Koch was born on December 11, 1843 at Clausthal in the Upper Harz Mountains in the northwestern region of Germany. As a boy, he attended the local high school where he showed an interest in science and biology and, like his father, a strong desire to travel.

At the age of nineteen, Koch went to study medicine at the University of Göttingen under the Professor of Anatomy, Friedrich Gustgav Jacob Henle. Henle, who in 1840 had published that diseases were caused by living, parasitic organisms, no doubt strongly influenced Koch. Consequently, after completing his M.D. in 1866 and marrying the mother (Emmy Fraats) of his only child (Gertrud b. 1865), Koch traveled to Berlin for six months to study chemistry under the influence of Virchow. During the late 1860s, Koch worked as an Assistant in the General Hospital at Hamburg and began a general practice, first at Langenhagen, and later at Rackwitz, in the Province of Posen. Here he passed his District Medical Officer’s Examination, and in 1870, he volunteered for service in the Franco-Prussian war where he served as District Medical Officer for Wollstein, Prussian Polland from 1872 to 1880. It was at Wollstein that he carried out his epoch-making research which placed him at the forefront of the scientific community. 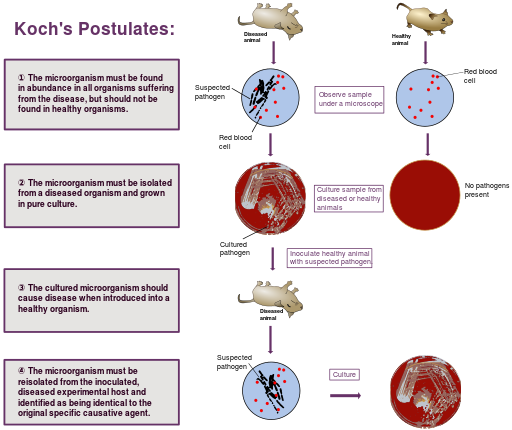 At that time, anthrax was prevalent among farm animals in the Wollstein district. Although limited by the lack of equipment, cut off entirely from libraries and contact with the scientific community, and under the rigors of his own busy practice, Koch set out to study this disease. Using a microscope given to him by his wife, his tiny flat became his early laboratory. Pollender, Rayer and Davaine had already discovered the anthrax bacillus and Koch set out to prove scientifically that this bacterium was the causative agent of disease. Davaine had previously shown the direct transmission of Bacillus anthracis between infected cows and so Koch began by inoculating mice with anthrax bacilli taken from the spleens of farm animals that had died of the disease. He quickly discovered that these mice, too, were killed by the bacilli. He compared these diseased mice to disease-free mice inoculated at the same time with blood from the spleens of healthy animals. This confirmed the earlier work of his colleagues.

However, this didn’t satisfy Koch’s keen sense of curiosity. He wanted to determine whether anthrax bacilli that had never been in contact with any animal could also cause disease. To do this, he developed techniques to obtain pure cultures of bacilli. He also noted the formation of spores inside the bacterium when growth conditions became unfavorable–especially when oxygen was lacking–and the resulting germination of these endospores when growth conditions improved. Though Koch knew that the bacilli were quite fragile and could not survive outside a host for very long, he knew they could build persistent endospores that could survive adverse conditions and maintain their ability to cause disease. Consequently, these endospores, common to sand and soil, were the causative agent of the spontaneous anthrax outbreaks.

Koch demonstrated this painstaking work to Ferdinand Cohn, Professor of Botany at the University of Breslau, who called a meeting of his colleagues to witness this demonstration. Among the colleagues in attendance was Professor Cohnheim, Professor of Pathological Anatomy. Cohn and Cohnheim were deeply impressed by Koch’s work, and in 1876, Cohn published Koch’s work on anthrax in the botanical journal where he was editor. Koch became an instant sensation, yet he continued to work at Wollstein for four more years, improving his methods of fixing, staining and photographing bacteria and studying diseases caused by bacterial infections of wounds. In 1878, he published his results and provided, as he had done with his anthrax work, a practical and scientific basis for the control of these infections.

Koch continued to work without adequate quarters or conditions until 1880, when he was appointed a member of the Reichs-Gesundheitsamt, or Imperial Health Bureau, in Berlin. There, he was provided with a laboratory in which he could work with his assistants, Loeffler, Gaffkey and others. It was here that Koch began to refine his bacteriological methods and where he invented new methods for cultivating pure cultures of bacteria on solid media such as potato, and on agar kept in a flat dish invented by his assistant, Julius Richard Petri. He later developed new staining methods to improve the visualization and identification of bacteria. The result of all his work was the introduction of methods used to obtain pure cultures, free from other organisms, and to detect and identify pathogenic bacteria. In addition, in 1881 he urged for the sterilization of medical instruments using heat. Koch also laid down the foundation of what is now known as Koch’s postulates; criteria which are required before accepting that particular bacteria cause particular diseases: (1) the microorganism must be found in abundance in all organisms suffering from the disease, but not in healthy organisms; (2) the microorganism must be isolated from a diseased organism and grown in pure culture; (3) the cultured microorganism should cause disease when introduced into a healthy organism; (4) the microorganism must be reisolated from the inoculated, diseased experimental host and identified as being identical to the original specific causative agent. 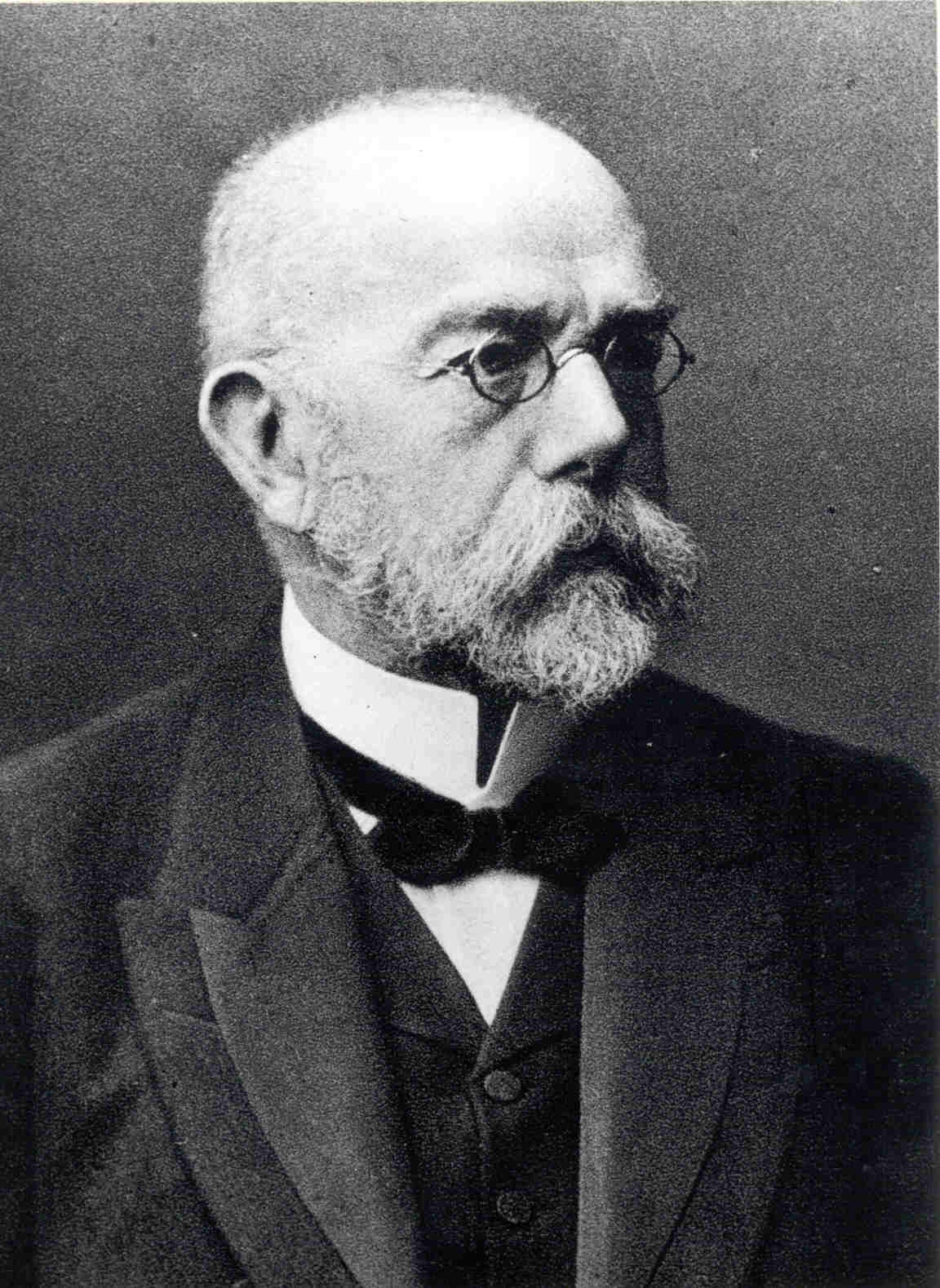 Two years after Koch’s arrival in Berlin, he discovered the tubercle bacillus (Mycobacterium tuberculosis) and a method for growing this bacterium in pure culture. He later published his work in 1882, and in 1883, he was still working on tuberculosis when he was sent, along with a French research team, to Alexandria, Egypt as Leader of the German Cholera Commission to investigate an outbreak of cholera. While in Egypt, he independently discovered the vibrio that causes cholera (it had been previously isolated by an Italian anatomist named Filippo Paccini in 1854, but ignored at that time) and isolated pure cultures of this bacterium on which to focus his studies. He continued to work on cholera when he returned to Germany and later when he traveled to India.

Using his knowledge of the mode of distribution of the cholera vibrio and his understanding of its life cycle, Koch formulated guidelines for the control of cholera epidemics which were approved in 1893 by the Great Powers in Dresden. Consequently, these guidelines formed the basis of control methods which are still in use today. His work on cholera, for which Koch won a prize of 100,000 German Marks, also became an important influence on plans for the conservation of municipal drinking water supplies.

In 1885, Koch became the newly appointed Professor of Hygiene and Director of the newly established Institute of Hygiene at the University of Berlin. Five years later, he was appointed Surgeon General of Berlin and, in 1891, became an Honorary Professor and Director of the new Institute for Infectious Diseases there. It was at the Institute that he was fortunate to serve among such contemporaries as Paul Ehrlich, Emil von Behring and Kitasato Shibasaburo, who themselves made great discoveries in bacteriology.

During this time, Koch returned to his early work on tuberculosis and sought to arrest the disease by means of a potion, which he termed tuberculin, made from pure cultures of the tubercle bacilli. During the mid-19th century, tuberculosis was the cause of one in seven deaths throughout Europe and Koch was determined to find a cure. Koch concocted two mixtures, called old and new tuberculin, and his first communication on the old tuberculin aroused considerable controversy. He claimed that a healing power would be obtained from this preparation, but unfortunately this was greatly exaggerated and, when the mixtured failed to perform as expected, public opinion went against both Koch and his potion. Undaunted by skeptisism, Koch announced the new tuberculin in 1896. The curative value of this mixture was also disappointing; nevertheless, its invention led to the discovery of new substances with diagnostic and medical value. During this time, Koch’s colleagues at the Institute of Infectious Diseases, Ehrlich, von Behring and Kitasato, carried out and published their epoch-making work on the immunology of diphtheria while the quality of Koch’s work began to decline.

Koch traveled to South Africa in 1896 to study the origins of rinderpest–an infectious viral disease of cattle, domestic buffalo, and some species of wildlife that is commonly referred to as cattle plague or steppe murrain. Although he did not identify the causative agent of this disease, he succeeded in limiting the outbreak by injecting the bile from the gall bladders of infected animals into healthy farm-stock. He later traveled to India and Africa where he worked on malaria, blackwater fever, surra of cattle and horses and plague and he published his observations on these diseases in 1898. Shortly after his return to Germany, Koch traveled to Italy and the tropics where he studied the etiology of malaria and its control with quinine.

In his later years, Koch reformulated his hypothesis on tuberculosis and came to the conclusion that the bacterium that caused the human and bovine forms were not identical. His statement of these new findings at the International Medical Congress on Tuberculosis in London in 1901 resulted in much controversy and opposition, but contempory research on tuberculosis has since confirmed Koch’s revised view. Around the same time, Koch’s work on typhus led to new control measures for safer sanitary practices when he showed that the disease was transmitted from man to man more so than from contaminated drinking water.

In December of 1904, Koch resigned from his Directorship at the Institute for Infectious Diseases and traveled to German East Africa to study East Coast fever in cattle. He made important observations on this disease, as well as on pathogenic species of Babesia and Trypanosoma and on tickborne spirochaetosis, and he continued his work with these after he returned home. Consequently, in 1905 Koch was awarded the Nobel Prize for Physiology or Medicine for his findings on tuberculosis and, in 1906, Koch returned to Central Africa to continue his work on the control of human trypanosomiasis. It was in Central Africa that Koch expanded his experimental work on bacteriology and serology and where he discovered that atoxyl is an effective agent against trypanosomiasis.

Dr. Koch died on 27 May 1910 of a heart-attack in Baden-Baden at the age of 66. During his lifetime, he was the recipient of many prizes and medals, honorary doctorates of the Universities of Heidelberg and Bologna, honorary citizenships of Berlin, Wollstein and his native Clausthal, and honorary memberships of learned societies and academies in Berlin, Vienna, Posen, Perugia, Naples and New York. He was given prestigious awards from the German Order of the Crown, the Grand Cross of the German Order of the Red Eagle and Orders from Russia and Turkey. The students he mentored throughout his career found organisms responsible for diseases such as diphtheria, typhoid, pneumonia, gonorrhea, cerebrospinal meningitis, leprosy, bubonic plague, tetanus, and syphilis, among others, by using his methods. Furthermore, he was posthumously honored by memorials and by several countries for his contributions to medicine and microbiology. He inspired major figures such as Paul Ehrlich and Gerhard Domagk and he will forever be considered one of the founders of modern microbiology. Koch crater on the Moon was named in honor of him and the Robert Koch Prize and Medal were created to honor scientists who make groundbreaking discoveries or who contribute to global health in a unique way such as he did. Perhaps Dr. Koch’s greatest gift lives on every day in the lives of physicians, microbiologists, researchers, students and, yes, even Hardy employees who are currently working under his postulates and making discoveries to treat the latest agents of infectious disease.